Family, domestic and sexual violence is a major health and welfare issue. It occurs across all ages, socioeconomic and demographic groups but mainly affects women and children. Indigenous women, young women and pregnant women are particularly at risk. This report explores the extent, impact and cost of family, domestic and sexual violence in Australia, and looks at what could be done to fill important data gaps.

1 in 6 (1.6 million) women have experienced physical and/or sexual violence by a cohabiting partner since age 15

1 in 16 (0.5 million) men have experienced physical and/or sexual violence by a cohabiting partner since age 15

Family, domestic and sexual violence is a major health and welfare issue. It occurs across all ages, and all socioeconomic and demographic groups, but predominantly affects women and children.

This report explores the latest data available to the Australian Institute of Health and Welfare on family, domestic and sexual violence in Australia. It brings together information from multiple sources on victims and perpetrators and on the causes, impacts and outcomes of violence. Gathering this information highlights notable data gaps which, if filled, could strengthen the evidence base and support the prevention and reduction of family, domestic and sexual violence in Australia.

As many data collections focus only on violence perpetrated by an intimate partner, particularly male violence against women, much of this report focuses on domestic violence.

Family violence refers to violence between family members, typically where the perpetrator exercises power and control over another person. The most common and pervasive instances occur in intimate (current or former) partner relationships and are usually referred to as domestic violence. Sexual violence refers to behaviours of a sexual nature carried out against a person’s will. It can be perpetrated by a current or former partner, other people known to the victim, or strangers. Women are at greater risk of family, domestic and sexual violence

Men are more likely to experience violence from strangers and in a public place; women are most likely to know the perpetrator (often their current or a previous partner) and the violence usually takes place in their home.

One in 6 Australian women and 1 in 16 men have been subjected, since the age of 15, to physical and/or sexual violence by a current or previous cohabiting partner (ABS 2017b). Family, domestic and sexual violence happens repeatedly—more than half (54%) of the women who had experienced current partner violence, experienced more than one violent incident (ABS 2017b). However, between 2005 and 2016, rates of partner violence against women have remained relatively stable (ABS 2006, 2017b).

Some groups are more vulnerable

Women and men who experienced abuse or witnessed domestic violence as children (before the age of 15) are also at increased risk. 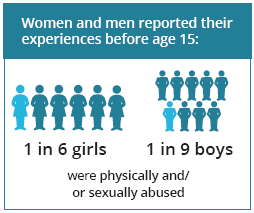 Children are often exposed to the violence

There are limited data on the nature, extent and impacts of family violence on children. Despite this, qualitative research has shown that children exposed to family, domestic and sexual violence can experience long-term effects on their development and have increased risk of mental health issues, and behavioural and learning difficulties (Campo 2015).

Children can experience family violence as a witness and/or a victim. More than two-thirds (68%) of mothers who had children in their care when they experienced violence from their previous partner said their children had seen or heard the violence (ABS 2017b). As well, 1 in 6 (16%, or 1.5 million) women reported having experienced physical and/or sexual abuse before the age of 15 (as girls), and 1 in 9 (11%, or 992,000) men reported having experienced this abuse when they were boys (ABS 2017b).

Most behaviours identified as child abuse fall under the broad definition of family violence. In 2015–16, about 45,700 children were the subject of a child protection substantiation (investigated notification where there is sufficient evidence of abuse or neglect). A large and growing number of children are placed in out-of-home care as a consequence of this abuse (55,600 children in 2015–16) (AIHW 2017a). The toll of family, domestic and sexual violence is substantial

Intimate partner violence also has serious impacts on women’s health. In 2011, it contributed to more burden of disease (the impact of illness, disability and premature death) than any other risk factor for women aged 25–44. Mental health conditions were the largest contributor to the burden due to physical/sexual intimate partner violence, with anxiety disorders making up the greatest proportion (35%), followed by depressive disorders (32%) (Ayre et al. 2016). In 2015–16, the financial cost of violence against women and their children in Australia was estimated at $22 billion (KPMG 2016).

It is likely that Aboriginal and Torres Strait Islander women, pregnant women, women with disability, and women experiencing homelessness were underrepresented in this calculation. Accounting for these women may add another $4 billion (KPMG 2016).). There are data gaps in key areas, including for victims, perpetrators and at-risk groups

Although much is known about many aspects of family, domestic and sexual violence, there are several data gaps that need to be filled to present a comprehensive picture of its extent and impact in Australia. Specifically, there is no, or limited, data on:

What needs to be done to fill the gaps?

A number of actions can be taken to improve current data collection, quality and comparability, and to fill data gaps. These include:

Priority data gaps will be further refined in consultation with stakeholders.

2 thoughts on “Family, domestic and sexual violence in Australia, 2018”